In this tutorial we will explain how to use the flexibility of the real-space grid to treat systems that are periodic in only one or two dimensions. As examples we will use a Na chain and a hexagonal boron nitride (h-BN) monolayer.

Another point worth noting is how the Hartree potential is calculated for periodic systems. In fact the discrete Fourier transform that are used internally in a periodic calculation would always result in a 3D periodic lattice of identical replicas of the simulation box, even if only one or two dimensions are periodic. Fortunately Octopus includes a clever system to exactly truncate the long-range part of the Coulomb interaction, in such a way that we can effectively suppress the interactions between replicas of the system along non-periodic axes 1 . This is done automatically, since the value of PoissonSolver in a periodic calculation is chosen according to PeriodicDimensions. See also the variable documentation for PoissonSolver.

Let us now calculate some bands for a simple single Na chain (i.e. not a crystal of infinite parallel chains, but just a single infinite chain confined in the other two dimensions).

First we start we the ground-state calculation using the following input file:

Most of these input variables were already introduced in the Periodic systems tutorial. Just note that the ‘‘k’'-points are all along the first dimension, as that is the only periodic dimension.

The output should be quite familiar, but there are some noteworthy differences.

Here we see that we are indeed running a 3D system that is periodic along one dimension.

Although we specified three lattice parameters in the input file corresponding to three lattice vectors, here the code tells us that it’s only using one lattice vector. This is because the lattice is only periodic along one direction and therefore it is fully determined by the first vector. The other vectors are ignored when generating the Bravais lattice, but they are still used for two other purposes. First, they allow to specify atomic positions in reduced coordinates, which is useful when copying the coordinates from other codes. Second, they specify the lenght of the paralleliped box used to generate the real-space grid. This is confirmed a few lines later:

Note how the lengths along ‘y’ and ‘z’ are the same as the lenghts of the corresponding lattice parameters specified in the input file.

Finally, this piece of output confirms that the code is indeed using a cutoff for the calculation of the Hartree potential, as mentioned in the Introduction. The cutoff used is a cylindrical cutoff and, by comparing the FFT grid dimensions with the size of the simulation box, we see that the Poisson solver is using a supercell doubled in size in the y and z directions.

At this point you might want to play around with the number of k-points until you are sure the calculation is converged.

We now modify the input file in the following way:

and run the code. You might notice the comments on the the LCAO in the output. What’s going on? Why can’t a full initialization with LCAO be done?

You can now plot the band structure using the data from the static/bandstructure file, just like in the Periodic systems tutorial. 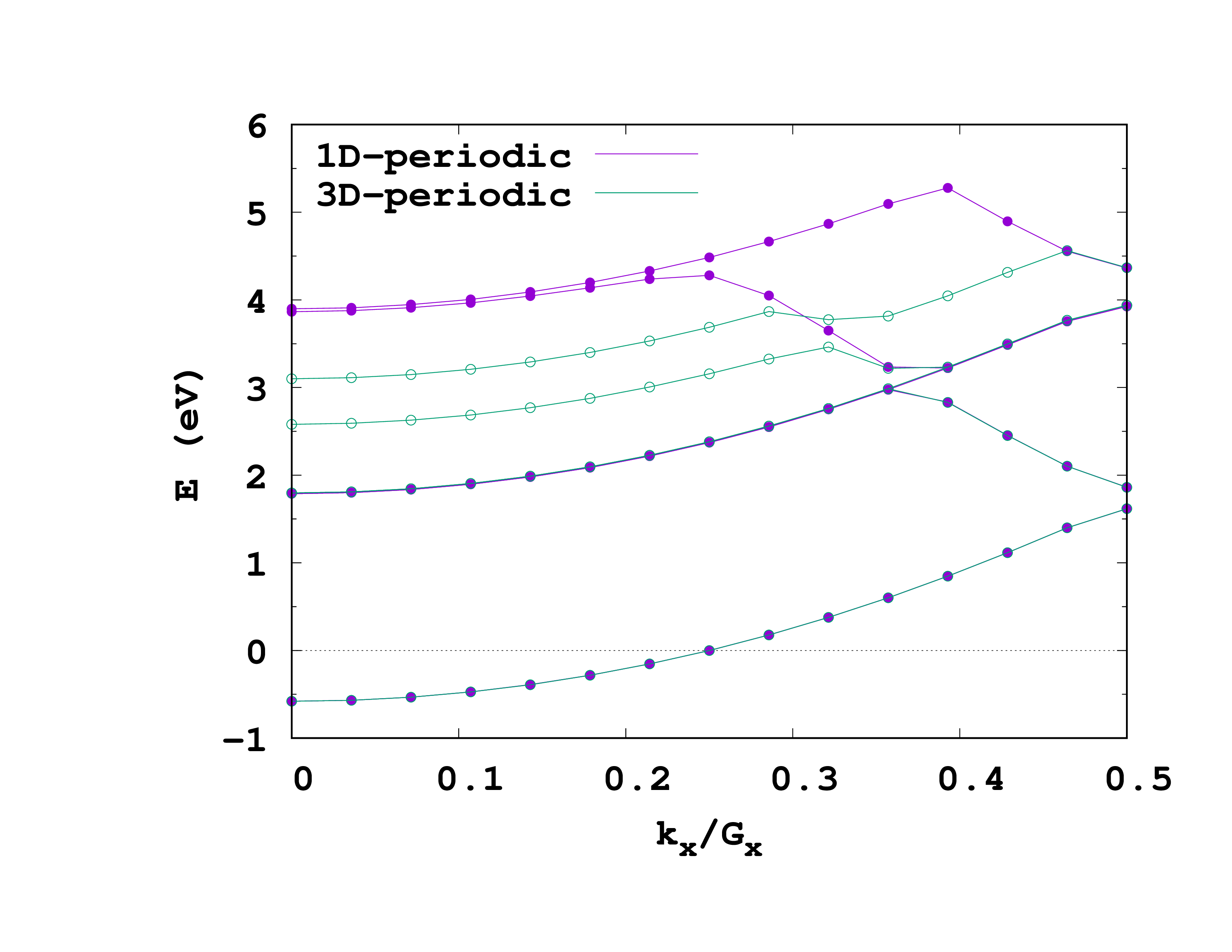 Band structure for a infinite chain of Sodium atoms, calculated for a single chain (purple lines), and a 3D-periodic crystal of chains in a supercell (green lines).

Hexagonal boron nitride (h-BN) is an insulator widely studied which has a similar structure to graphene. Here we will describe how to get the band structure of an h-BN monolayer.

We will start by calculating the ground-state using the following input file:

Most of the file should be self-explanatory, but here is a more detailed explanation for some of the choices:

If you now run the code, you will notice that the cutoff used for the calculation of the Hartree potential is different than for the Sodium chain, as is to be expected:

After the ground-state calculation, we will now calculate the band structure. This is the input for the non-self consistent calculation: 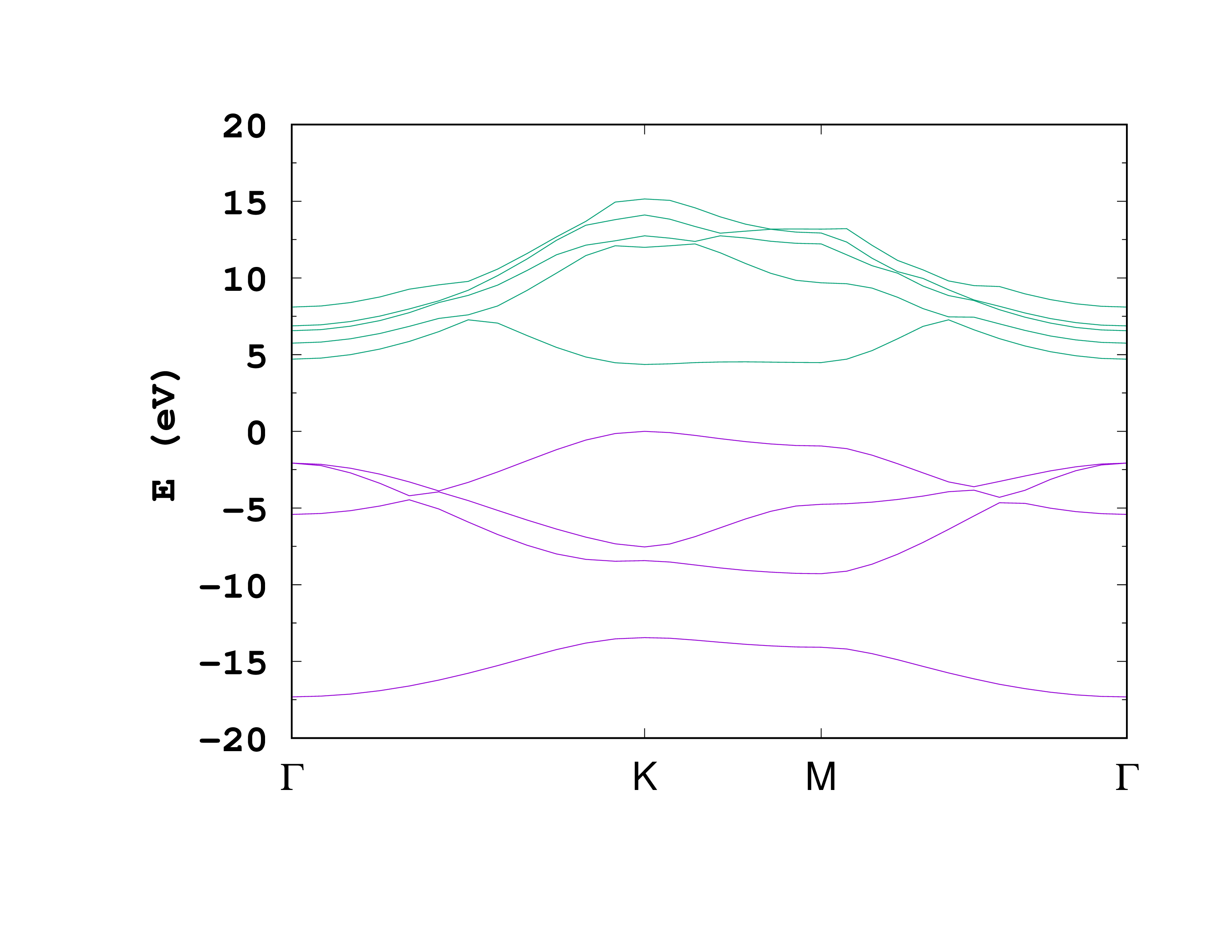 Band structure of a monolayer h-BN.