In this tutorial, we look at how to perform a band-structure unfolding using Octopus.

This calculation is done in few steps, which are described below. First, we need to compute the ground state of a supercell.

Here we start with the input file for Octopus. This is a ground state calculation for bulk silicon, similar to the one of the tutorial Periodic Systems. In the present case however, we will use a supercell of Si, composed of 8 atoms.

Most of these variables are already used in other tutorials, so the interested read could refer for instance to Getting started with Periodic Systems for a detailed description.

After running Octopus using the previous input file, we have the obtained the ground state of the supercell. We now want to define the primitive cell on which we want to unfold or supercell, and the specific k-point path that we are interested in.

This is done by adding to the input file the following lines:

Lets see more in detail some of the input variables:

The unfolding still been an experimental feature, you also need to add to your input file the line

In order to perform the unfolding, we must compute wavefunctions in the supercell at specific k-points. These points are described in the file unfold_kpt.dat. To get them, we need to run an non self-consistent calculation using

In order to use the list of k-points obtained in step 1, we remove from the input file the k-point related variables (%KPointsGrid, %KPointsPath, or %KPoints) and we replace them by the line

We then run Octopus on this input file. Note that in order to get extra states, one should use the variables ExtraStates and ExtraStatesToConverge, as for a normal band structure calculation, see Periodic Systems.

For this tutorial, we used

Here, we are requesting to converge 4 unoccupied states, which all correspond to the first valence band in the folded primitive cell, as the supercell is 4 times larger than the initial cell.
Expand for complete input file

Note that after you performed this step, you cannot run a TD calculation in this folder. Indeed, the original GS states have been replaced by the one of this unocc calculation.

Now that we have computed the states for the required k-points, we can finally compute the spectral function for each of the k-points of the specified k-point path. This is done by changing unfolding mode to be

This will produce the spectral function for the full path (static/ake.dat) and for each individual points of the path (static/ake_XXX.dat). The unfolded bandstructure of silicon is shown below. 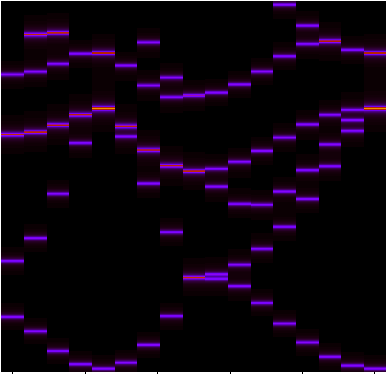 Note that in order to control the energy range and the energy resolution for the unfolded band structure, one can specify the variables UnfoldMinEnergy, UnfoldMaxEnergy, and UnfoldEnergyStep.

It is important to note here that the code needs to read all the unoccupied wavefunctions, and therefore will need to have enough memory.